Hey, my name is Ian Jennings. I’m the founder of Haxor, and we make this crazy app called Paircast.

Haxor’s mission is to improve the accessibility of technology. Our first target is documentation.

Why? Documentation is a means of establishing inclusive and accessible communities, but there’s a huge problem. Take a look at these results from a survey of open source communities by GitHub in 2017.

93 percent of the respondents noted that incomplete or outdated documentation is a pervasive problem, but 60 percent say they rarely or never contribute to documentation.

This is the #1 problem reported by members of the open-source community!

So what gives? How can documentation be so highly valued, yet so few developers contribute? My friend Taylor Barnet has an answer.

I’ve seen that often developers have no desire to write documentation. It requires time and effort. When there?s pressure to complete tasks or deliver software on time, an engineer would rather use the time elsewhere.

Engineers are strapped for time, in fact, the 2020 Stack Overflow survey shows that 75% of developers work overtime. When are they supposed to spend time writing?

Documentation is a key driver to adoption, hugely important to developers, and nobody has the time to write it.

Paircast helps developers document their code as they write it. Saving the time spent going back to remember what you changed and writing about it. Paircast is the ultimate resource for keeping things DRY.

Here’s how it works. Run Paircast in the background while you code. Paircast records your screen, microphone, and code changes. Every time you write a line of code, Paircast links that code to the screencast. 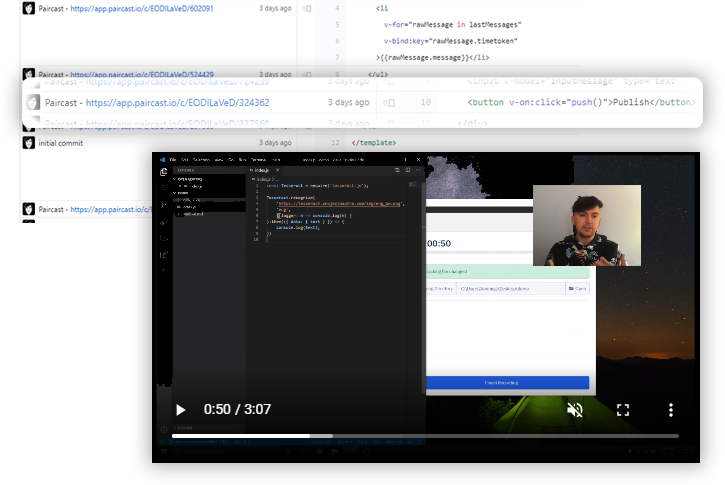 Then, when the next developer comes along, they can see exactly what you said and did to create that line of code.

What did you change before? What applications were open? What charts were you looking at? What logs did you tail?

By creating video documentation as you code, you help any developer that works with your code get started. It takes no additional time and provides a ton of context.

But it doesn’t stop with video. Paircast transcribes your speech to create markdown documentation you can use to create readmes and tutorials.

Interested in trying it out? Paircast is in beta with invites going out…today! Join the Paircast beta.